You always hear it – adding alternative text to your images is the number one suggestion people give when the topic of making your social media accounts more accessible comes up. But sometimes instead of alternative text, people will say image descriptions. Less clear at times is what’s the difference, where to add them, or what to write once you figure out where to put it. So let’s break all of that down.

What is the Difference Between Alternative Text and Image Descriptions?

Although sometimes these terms are used interchangeably, there are a few distinctions between alternative text and image descriptions, particularly on Instagram.

In Fall 2018, Instagram announced upgrades to their platform to allow users to embed their photo with alternative text to describe the photo for those using screen readers.  This is a huge development, and while it’s not perfect, it’s an easy way to start improving your accessibility on Instagram.   It’s not the easiest feature to find, though.

On the same screen where you are writing your caption for your post, at the very bottom you’ll see Advanced Settings.  Clicking on that gives you several additional options for your posts, including Write Alt Text.

I’ve done some testing, and it doesn’t appear that there is a character limit for the alt-text you provide for an image.  That said, keep in mind it will be read after your username and before your caption, so be descriptive, but concise. If you want to go into more detail, add an image description to your caption.

In another huge step to increase the number of accessible Instagram accounts on the platform, they have also started automatically adding alternative text to images using computer-generated analysis for images where it hasn’t been supplied by the owner.  For the record, I turned on the screen reader on my phone, and it was hit-or-miss – both in terms of providing descriptions, and how photos were described.   Even when it does work, “Image may show two people; outdoors” doesn’t provide nearly the same visual impact as “Johnny and Julie smiling emphatically while holding Mickey-shaped balloons while enjoying a sunny, fun-filled day in the Magic Kingdom.”  So there is still benefit to creating your own rather than relying on artificial intelligence to describe your images for you.

If you forget to add alternative text before you post your photo, or want to change something you’ve written, don’t worry – you can adjust it even after your photo has posted!   If you click edit on an existing Instagram post, on the lower-right hand side of the image you will see the option to “Add Alt-Text.”

Prior to the ability to add alternative text to images on Instagram, it was common for accessibility-minded Instagrammers to include an image description within their caption.  I would typically place a description after my photo caption, preceded by #PhotoDescription. This hashtag is a good way to signal to blind or visually impaired Instagrammers that you’re including descriptions of your images and that you might be worth a follow because you’re making sure they’re included in the conversations happening.

You may wonder why if you are including alternative text you would also want to include a photo description. Wouldn’t that be redundant for people using screen readers? My friend Katie, from Katie’s Vision, has also made an excellent point about that: “I still try to include an image description in my actual post too, for people who don’t use a screen reader, but may struggle to see a whole picture.”

There are several other reasons to include image descriptions on your Instagram photos:

Unlike photos, you cannot currently include alt-text when you upload videos to Instagram.  That includes images with animated graphics that Instagram interprets as a video. So if you are uploading a video, include a brief video description in the caption just as you would an image description. If the video includes someone speaking, you should also include captions when uploading the video or a transcript in the caption.

Even if you add text on top of an image on your Instagram Stories, a screen reader will not read that because once you upload it, it becomes part of the image. Screen readers can interpret some things as text within an image, like if you use the Questions or Quizzes features. But that also relies on the person viewing the story to know exactly where to tap their figure to pick up the text. That’s not to say it can’t happen, but you shouldn’t rely on it. And it wouldn’t make sense to use them to add image descriptions, because that would be confusing for your sighted followers.

If you send someone an image or gif through direct messages, currently there is no way to add alternative text to it. A screen reader can interpret emojis, which I often send as a response. But if you respond to someone with a picture or gif and they use a screen reader, they may need more clarification for what it contains.

Tips for Writing Alternative Text and Image Descriptions on Instagram 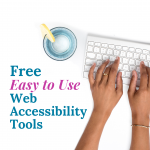 Easy to Use Web Accessibility Checkers for Beginners 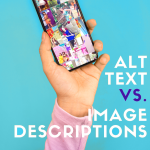 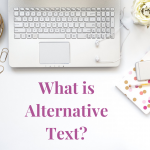 What is Alternative Text?

By subscribing to our newsletter, you consent to receive new post updates and occasional promotional emails related to our company.

We use cookies to ensure that we give you the best experience on our website. If you continue to use this site we will assume that you are happy with it.Ok